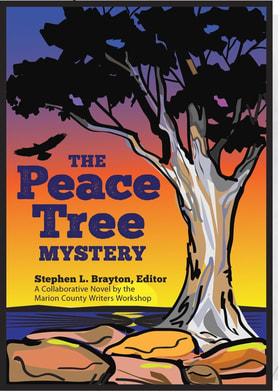 ​The Peacetree Mystery (A Novel)

Marion County, Iowa is usually a quiet place where people get along and enjoy the scenic activities of Lake Red Rock. But when Jacob Wildcrow, a local Native American, begins having visions of a quest that may involve a possible treasure, the possibility attracts fortune hunters throughout the county.

​Local teacher Justin, “Digger” Clay wants to help Wildcrow for historical purposes and because he is attracted to Wildcrow’s beautiful granddaughter, Grace. However, he struggles with his current girlfriend’s attempt to destroy the lake area with a new casino. Grace is convinced that her grandfather’s visions are fantasies, since she has rejected her Native American heritage long ago.

A convicted felon on the run could use the treasure to finance a new criminal organization. And a pair of bumbling, low-life brothers wreak havoc throughout the countryside in their misguided attempts to find the treasure for themselves.

While the Sheriff tries to keep order in the county, he also must contend with mysterious fires, sinkholes, and a missing person.
Who will be first to complete the quest? Will the mysterious events in the county be resolved? Could the quest lead to murder?
Go to purchase page

In the fall of 2013, now some 9 years ago, the members of the Marion County Writers Workshop, in a moment of frivolity, hatched an idea of writing a collaborative novel. As has always been the case, we had among our group members of the local historian organization, who suggested we write about the Peace Tree, a local landmark of historic note (see below).

Ideas flowed like scattered buckshot and over the next few weeks, what started as a snowball, destined to melt within minutes, got rolling down the hill, took on heft and momentum. Enthusiasm for the project grew, and, as will happen in groups, everyone had ideas about plot, locations, characters, tone, timelines, on and on. So, in the guise of the “Weekly Writer’s Challenge,” we all worked out scenes on the page. Somehow, this disparate work coalesced into the semblances of a loosely cohesive novel.

Plot lines firmed up, characters appeared before us, and true to its inception, a tone of frivolity and humor dominated. In short, all of us decided, for this book anyway, that we wouldn’t shoot for a Pulitzer Prize in fiction, but rather find a way to entertain, to educate, and to celebrate the land in which we all lived.

As my memory serves me, about eighteen months later, while also working on our other individual projects, we had the majority of the book written. What remained was for us to simply piece it together, write some linking scenes, some missing scenes and throw out stuff that simply didn’t work.

This is where my memory gets fuzzy. The “Writer’s Challenges” moved on the other prompts, each of us had our own writing and publishing goals. Members dropped out or moved on to other groups. New members came in with their own writing agendas. Enthusiasm waned, momentum declined, work product suffered. Soon, I began to think of the project as simply another step along each of our individual writer’s lives, like so many first drafts that never come in front of our alter-ego, the editor.

Stephen Brayton made an attempt to gather me in to do just that, two or three years later. While sitting at a picnic table on a glorious autumn day in the Marion County Park as part of our traditional “Camp Write,” we made an attempt to 1) find all the individual pieces, now lost in buried files in our devices; 2) determine if the original writers wanted to contribute - if they could even be located; and 3) a method to finally get the work to completion. It seemed  a waste to not.

I’ll confess here and now that I was not as enthusiastic as Steve. I had my own stuff to work on, didn’t I?

Somewhere along the way, the actual Peace Tree, the long-dead Sycamore which had for decades been a landmark and nautical reference point, sticking up above the surface of Lake Red Rock as it did, disappeared. How to account for that? Was it simply rot? Vandalism? It was a mystery.

Five years later, during the pandemic, Steve found himself with some time on his hands. One day, he announced he was working on the project. By himself.

At about the same time, I had begun hatching ideas of starting up an annual publication to highlight especially good short writing and had enlisted some enthusiasm from our membership. The two efforts seemed to gather strength from each other and the next thing we knew, we were moving forward with both. Me, with what we called tentatively, The Marion County Review, and Steve, with spearheading the renewed effort to get The Peace Tree Mystery into final form.

We held weekly meetings, assignments were made, people got busy. Six months later, we knew we were going to publish this novel. If you’re reading this, then we have succeeded  Excuse the cliche, but it does feel a lot like watching the Phoenix rise from the ashes.
-- Michael Van Natta